When it comes to design, there are certain rules that you break at your peril. Generally speaking nobody likes small images. when I worked in newspaper design, I learned a simple rule: “If you have a good picture, use it big. If you have a bad picture, use it big anyway.” I also learned that certain ratios of height and length work better than others, because they are more aesthetically pleasing. As a general rule, a little under 3:2 works best. If you’re looking for something more dramatic, be bold in your proportions but use this device sparingly, or it loses its impact. And just as nature abhors a vacuum, all good designers know that square images simply don’t work.

When it comes to type – less is more. Just because we can now choose from thousands of typefaces, it doesn’t mean that we should. Thanks to the wonders of digitisation we now have more typefaces to choose from than ever before and what’s more, they come in an infinite variety of sizes. But once upon a time they didn’t. We worked with a small collection of fonts and a limited set of sizes in a type family, and we were all the better for it – designers and readers.

They key to all this lay in the arithmetical wonders of the point system. Type size was measured by the depth the face occupied on the page instead of working in inches printers and designers divided inches into points – and there were 72 points (more or less exactly) to the inch.  So if a font occupied an inch in depth on a page it was 72 points in size. Simple eh? Well, up to a point. To make matters even more interesting (and more complicated) most of the names were pronounced differently to the way they were spelled. The sizing went like this:

The space around type is important to the way we read. Setting one line of type bang on top of the other would result in unreadable copy. To add space between the lines of copy, strips of lead were inserted. That’s why we call the space between lines of type ‘leading,’ pronounced to rhyme with heading, not reading.
The point (if you see what I mean) about using these standardised sizes lay in the magic of the number 72. Given that they type was set with what we would call zero leading i.e. 8pt type on an 8pt body,  9pt on 9 and so on, the arithmeric of type was very simple. One line of 72 pt was an inch deep – as were two lines of 36pt, three of 24pt, four of 18pt, six of 12pt, seven of 10pt (more or less) eight of 9pt, nine of eight point and so on all the way down to 24 lines of Minikin. And the reason for the importance of all that was that in the days of hot metal typecasting, it was a good idea if you knew how much space your story was going to take up on a page.

All of which was fine when everyone worked in inches. Trying to convert points to the metric system (as many publications did before the advent of computers) made as much sense as ordering 472 millilitres of beer when you wanted a pint. As a country we have never got our heads around the idea of standardisation. Today we buy our fuel in litres but calculate fuel consumption in miles per gallon. In the UK we also measure warm days in Fahrenheit and cold days in Centigrade – because it’s more dramatic that way.

Even more delightfully, the French and the Americans used different names for most of the old type sizes and no one agreed on the size of a point anyway. Then the French took to sizing type in millimetres.  It took the introduction of what was originally called Desk Top Printing in the 1980s for everyone to standardise the points system.

Web design, working in pixel sizes, is far more logical but lacks the romantic appeal of names like Long Primer, Ruby and Nonpareil. 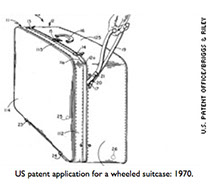 Why didn’t printers just use numbers instead of names in the first place? why not just call Minkin (3pt) “The Small Print’? Perhaps there is just a bit of poetry in all of us – even grimy, ink-stained printers.

You might as well ask why the human race put a man on the moon before anyone thought of putting wheels on luggage. Pictured left is the US patent application for putting wheels on a suitcase, dated a few months after the moon landing.

Posted in Effective Communication, Typefaces and tagged typefaces
← Why we need brands