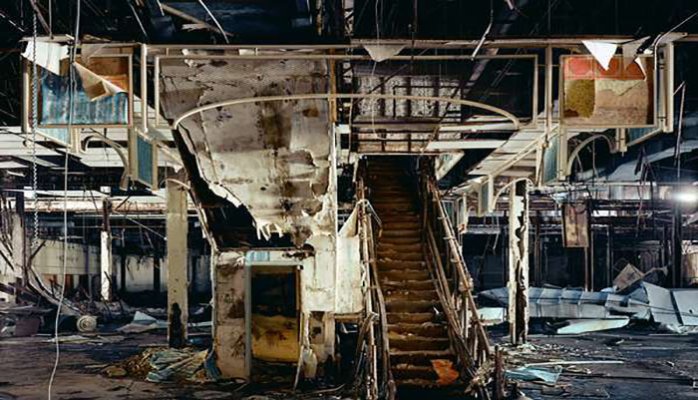 What a dead shopping mall looks like. Picture from Ghosts of Shopping Pas by Brian Ulrich.

The growth in online shopping has reached a critical point. Those who would defend the traditional “bricks and mortar” only approach to retail are doomed to failure. However, with every disruptive technology comes the chance to ride the wave and profit in the process. The key to success will lie in understanding that there is no difference any more between commerce and e-commerce. Successful business either have physical shops and online presence – or just an online presence.

There is only one e in commerce because events have over taken the idea of e-commerce as a separate activity. The term has become redundant.

Watching Mary Portas’s BBC series where she tries to breathe life and common sense in to the businesses of various commercially challenged UK retailers is reminiscent of the games I played on the beach as a boy – looking to dam the oncoming waves with piles of ever wetter sand. Great fun, but you knew you could never win.

The answer lies, as ever in the numbers. In the UK we are Europe’s most frequent online shoppers. The £1,000 a head we spent on average online last year was Europe’s largest per capita spend, although Germany is closing the gap rapidly. In the week that Barclays announced its new payment by Twitter system, it’s clear that a seismic shift in commerce will soon devour what’s left of the commercial heart of the UK High Street, leaving little but estate agents (for now), charity shops, pound shops. bookies, fried chicken emporia and tattoo parlours. Deep joy, but there it is.

In the US, the decline of shopping malls is reflected in the images of retail ghost towns, looking something like the remains of Chernobyl. The picture at the top of this post was taken by Brian Ulrich and comes from his book Ghosts of Shopping Past.

Ms Portas has some form in trying to revitalise failing retailers and although Einstein said that doing the same thing repeatedly and expecting a different outcome was the definition of lunacy, she evidently doesn’t agree. In 2012 she spearheaded a Government drive to revitalise the English High Street by launching revitalisation programmes in 12 medium-sized towns such as Bedford, Margate and Dartford. They were promised a boost in the form of more markets, better branding and pop-up shops. Other ideas included guerrilla gardening, street art, town criers and bicycle rickshaw services.

However, many of her main recommendations including free parking and cheaper business rates were not taken up by the Government. Two years later the total number of shops in the towns had decreased by 53.

Because we equate happiness with acquisition, we are doomed to shop more and more.

It’s not her fault. During those two years, numerous well-known retail brands disappeared forever. She’s just trying to build better sandcastles against the tide. But the tide (in the form of online shopping), will win out.

Because, as a society, we equate happiness with material acquisition, we are doomed to continue to want (and shop) more and more. But we are doing it less and less in traditional shops. In the UK, the average adult now spends more time online than they do asleep – and the virtual shops are always open, even when we are on the move.

A rapid history lesson. We are not quick to adapt to change.

There came a time (to quote Judge Rinder) in the UK when we did away with our delightful and quirky monetary system based around multiples of 12 and 20 and introduced a decimal currency. The old system had 12 pence to the shilling, 20 shillings to the pounds and lots of quirky coins with names like farthings (960 to the pound), threepenny bits (80 to the pound), tanners, bobs, florins and half crowns.

The abbreviation for pennies under this system was the letter ‘d’ (which stood, oddly, for the Roman word denarii). Under the new system, pennies – now 100 to the pound, were denoted (more sensibly) by the letter ‘p’. There were, of course, no old pennies in circulation but it took a good ten years for the public to stop referring to the new pence as “p” as in “a five p piece,” just to distinguish them from the old currency. But eventually pence became known as pence – because that’s just what they were. 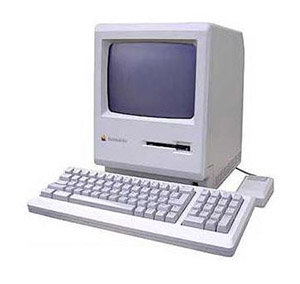 An Apple Mac Plus – 1 megabyte of RAM and a mouse like a housebrick. Frightening to think that I used to create magazines on one of these…

Again, in the eighties there was something called DTP – desk top publishing, which meant publishing with a computer instead of a Linotype machine and buckets of hot lead. But once all publishing was done with a computer, the term became meaningless and died out.

Now, let’s turn back to E-Commerce and if you can’t see where I’m going with this, you really haven’t been paying attention. There is only one ‘e’ in commerce because even businesses with a bricks and mortar presence have an online business – and if they don’t, they won’t have a business for long.

The speed of this revolution has been staggering – but we haven’t really noticed because we have been in the middle of it. But the economic model of the country has been transformed in less than a decade. Even though the people of the UK are the most frequent online shoppers in Europe the market is still immature. Online sales in the UK are set to grow from £38 billion in 2013 to more than £60 billion in 2016 – an annual growth rate of more than 15%. In contrast, in the UK, in-store sales will fall by just under two per cent in the next year.

And we are only at the beginning. Take a look at the home pages of some of the world’s most successful business from ten to 15 years ago. This was cutting edge technology then, but looks laughable by today’s standards. And it’s from these humble beginnings that a global and highly disruptive industry has quickly grown.

Chris Anderson’s book The Long Tail showed how new and small- to medium-sized businesses can nimbly move their operations away from the head of the distribution curve, where the big boys operate and the competition is fiercest, to service niche markets to great effect and profit, thanks to the global and growing reach of the Internet.

On the web, with good SEO and marketing, the world will roll past your shop door.

For example, if you have a passion for Texas swing music from the 1940s (and I don’t by the way) you could never run a traditional retail outlet and survive. Whatever your geographic location, you could never generate a big enough footfall to sell enough product to make a living. But on the web, with good SEO and marketing, the world will roll past your shop door. In a way, the more esoteric your product, the more the Long Tail will work for you. It doesn’t matter what you want. Pen nibs from the 1950s? Artisan French cheeses? Hand-made pen knives? Fish direct from Newquay? Beef from Forres in the Highlands? Tibetan rugs? Spare parts for kites? It’s all literally in the palms of our hands.

This is a new and profitable business model. So how do you turn an interest or, to use an overused term, a passion, into a business? There has never been a better time to get into an online selling business – providing we can buck the national trend and adopt more quickly to change than we have in the past. The technology has matured and the market is growing everywhere. Over the last 18 months or so, the creation of commerce sites has become increasingly easy, and the results proportionally more impressive.

We have gone through a typically painful period of technological development and settlement. The market has matured and we have now arrived at a situation where the bare bones of an e-commerce platform can be adapted quickly to create a stunning store that incorporates the benefits of SEO, customer management, order tracking, discount coupons, shipping costs, sales, loyalty bonuses, abandoned carts and all the rest. Once upon a time (say 2012 or 2013) finding such a solution called for costly custom development or a programme of spot-welding and hard coding together various plug-ins and widgets that were never designed to work together – or with any theme in particular. Such solutions could never be future proofed for long – a simple update to one site element could cause untold repercussions right across the business.

We took over one e-commerce site with a brief to update it and make it work properly – only to discover that it had been lashed together with enthusiasm, string, glue and bits of code. Just breathing on it would cause it to fall over. Strangely these sites are usually built by the customer’s cousin who is curiously no longer available to follow up on the original vandalism. 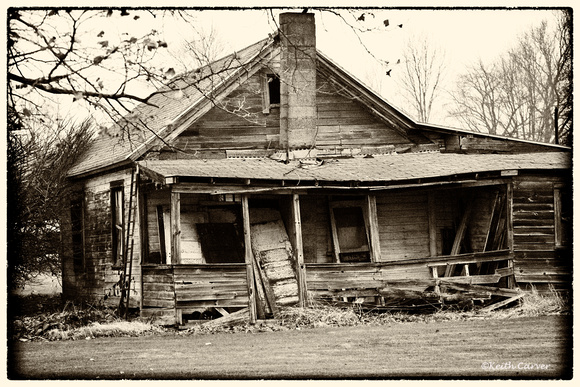 “My cousin built the site.” – words to send a chill down your spine.
Picture by Keith Carver. Zenfoto

It was like buying an old quaint house only to discover that it had been built by demented DIY-er with a disregard for all precepts of construction and safety. Our only solution in this case was to abandon the old site and start again – not a great way to start a relationship with a naive client who had confused a hefty invoice from his previous supplier with a certificate of proficiency.

It was Napoleon who disparagingly referred to Britain as “a nation of shopkeepers.” And while the big retailers are taking up a lot of the market (and paying little tax in the process) there is plenty of room to create wealth down at the long tail end of the market, and prove Bonaparte right.

The technological solutions are there – they work well and many of them look stunning. However, there is one thing that the web can never provide. Great customer service and the human touch will become ever more important as a differentiator, as technology provides more and more of the nuts and bolts of running a retail operation.